Filé forager and maker featured in our Bayou Bundle

On cold mornings I like to reminisce about drinking coffeemilk by the old space heater with my great-grandmother and eating her signature breakfast, which I can only describe as “space heater toast.”

Country people know what I’m talking about when I say “space heater.” A hallmark of old wood frame homes of Cajuns and Creoles, they replaced or supplemented chimneys or wood-burning stoves. There’s nothing like posting up in front of the old space heater and letting that back side get almost too hot to get you going on a cold morning.

When you spend time with the old people, you begin to appreciate their daily rituals. Of course she started the day with the strongest coffee, being either Community Coffee or a nostalgic New Orleans brand that she was able to afford on her USDA Food Stamp allotment.

Breathing steam in the old house, I would try to wake up first before all the veielles to light the old space heater myself. It was a coveted chance to play with fire, and the smell of gas and the sulphur of the kitchen match combined with the “ba-doume” of the light-up was a thrill.

Triggered by the heater, like a soldier to the bugle, Ma-Een would arise and start toward the coffee pot in a disciplined march toward caffeine. They had the heirloom enameled percolator of course, and drip pots, but the 1980s meant the future to the veielles and they liked their electric chrome coffee pot too.

She would sip her café until lamenting, “eh-ha,” further using body language to communicate the reluctant beginning of her day. I’d watch her pour the hot coffee into a the demi tasse looking cup, scoop in three heaping teaspoons of sugar, and pour in cold milk to magically change the color from midnight to a shade that resembled her leathery, age-thinned skin. That was my “coffeemilk” and I might would drink three cups if they’d let me.

The smell of Pall-Mall with no filter came next, and by then she would acknowledge me and say something like, “Hé Tonto, pass me them hamburger buns.” I guess the form of the hamburger bun reminded them of the old rolls they’d bake before “they came out with” sliced bread. 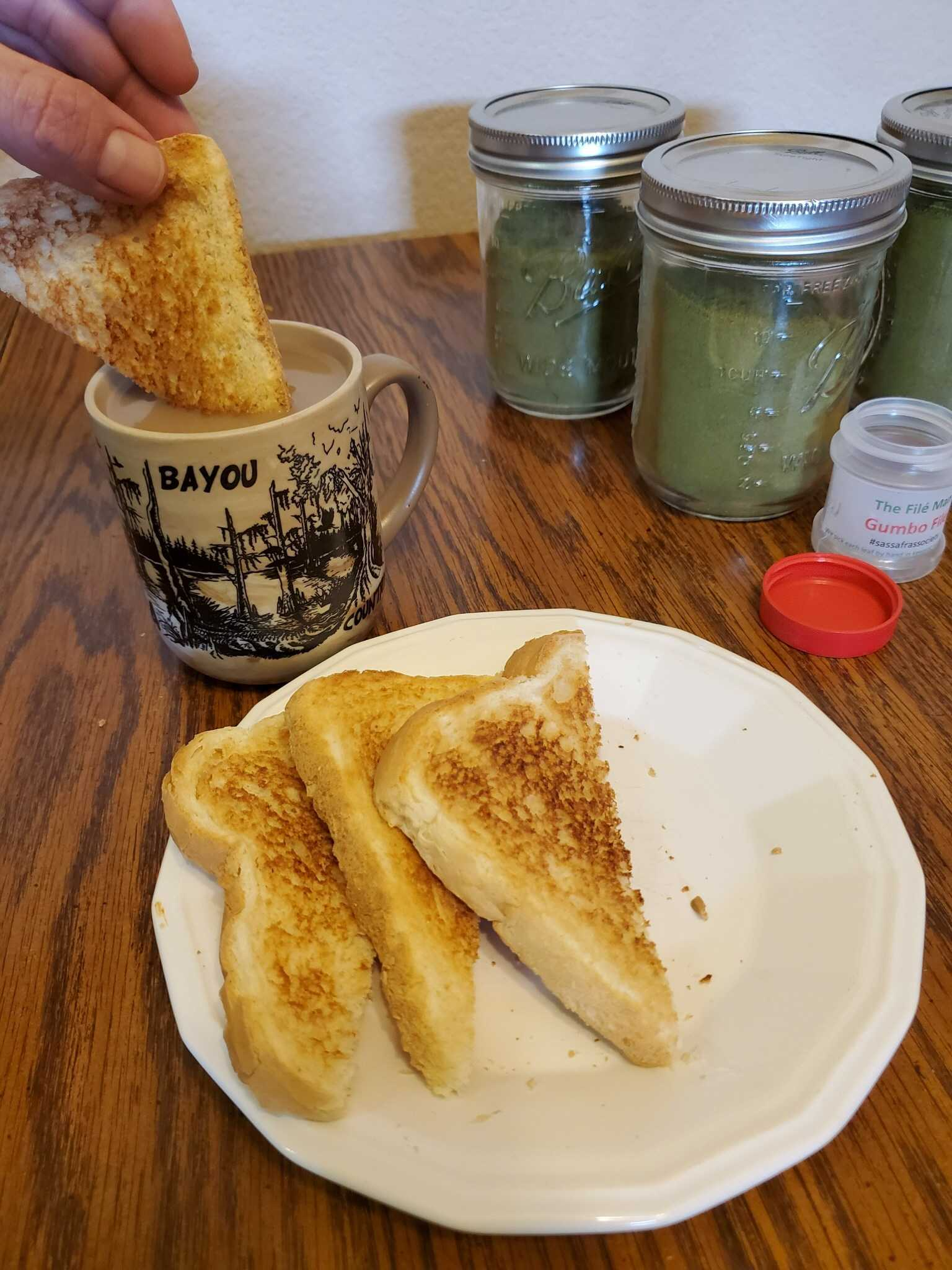 The old space heater had a metal wire “safety” guard with openings the size of hogwire to enclose the flame, likely not an NFPA-approved feature. Ma Een would use the sharp wire to skewer her buns in front of the open gas flame, as a primitive means to toast the bread. I earned the privilege of turning them to her sense of toasted perfection.

Warmed by the open flames of the space heater, we sat at the table for the finale. She sliced the toasted hamburger buns in two pieces, dunking one half into the coffee and quickly leaning over the cup to slurp the sweet, soggy bread without dripping a single drop.

I still catch the envie to for Ma-Een’s “space heater toast,” though my devolved technique now involves sandwich bread and a two-slice toaster.